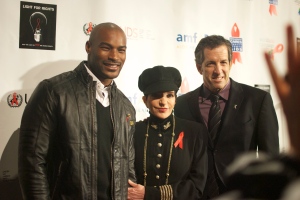 Before we get to more celebrity photos, and Tyson Beckford (in person he will hurt your eyes), I have a few things I want to share about World Aids Day 2010.

Every December 1st I always try to attend a vigil for World Aids Day and as someone who supports and tries to advocate for various human rights issues, this is the first year I can say that World Aids Day meant more than just showing support and compassion.

Bear with me here, as my story backs into this past Sunday evening.

First, on late night BBC news, I saw that the city of Delhi had its first Gay Pride Parade in history. Only in July last year did their High Court overturn a penal code that criminalized homosexuality. Exciting and hopeful news as you will see below.

On Sunday Nov 28th, Kenya’s Prime Minister Raila Odinga called for the arrest of all gay and lesbian people in Kenya.

“If found the homosexuals should be arrested and taken to relevant authorities,” Mr Odinga said.

If you can believe, he said that ” the recent census in Kenya showed there were more women than men and there was no need for same sex relationships.”

Now on Café Avra I haven’t truly shared this information, but over the last six months I spent in Nairobi, I got quite close to the LGBTI community. Most of my good, Kenyan (and Ugandan) friends in Nairobi were Lesbians, Bisexuals, Gay Men and Transgenders.

Why is this important? This is not a community of openly LGBTI individuals, but of unbelievably passionate, intelligent advocates and young leaders and who live in a variety of fear each day, whether of losing their job if their boss finds out their sexuality, being threatened by their families, getting arrested, and in many instances threat of rape and death.

In Kenya it is common that straight  men try will try to rape lesbian or bisexual women to ‘fix them’. (Yes, it happened to my close friend.)  In Uganda, in which I also met LGBTI individuals, I have heard of family members trying to kill their sons/daughters because of their shame to the family. (Yes, also happened to a friend.)

Many of them are members of a variety of advocacy organizations under GALCK, the Gay and Lesbian Coalition of Kenya.

I also just found out when reading about Mr. Odinga’s remarks that for the first time since 2006, GALCK was not invited by the National Aids Control Council to their  World Aids Day 2010. David Kuria, Head of GALCK, ” This is particularly ironical because this year’s theme “Access and Human Rights” resonated so uniquely with the plight of our community.”

I will be sharing some audio footage on Café Avra in the upcoming weeks, as I want you to hear some of their stories.

As we know the LGBTI global community is one of the worst hit of the HIV/AIDS epidemic, and tragically continues to have some of the highest rates of infection.

So what about this community in Kenya and Uganda who are infected with HIV? I hear that in Uganda a gay individual with HIV is called a”double closeted” individual. Can you begin to imagine the fear a LGBTI and HIV infected individual must be living with in Uganda each day?

Again, the theme for World Aids Day 2010 is “Universal Access and Human Rights”.

For me, this World Aids Day 2010 is not only about remembering and honoring the lives of those who passed, but also accepting all communities and all people, ALL THE TIME. Whether they are straight (most infected straight people in Africa actually get the disease from their spouse), Gay, Lesbian, Bisexual, Transgender, Intersex or none of the above!

We should deny no one respect, no matter what a person wants to classify themself as.

Let’s not wait another year , until December 1st, 2011 when  we reiterate this discussion.

Let’s start yesterday on consciously accepting every individual on his or her merits and deeds and not on their sexuality.

And for those of us who preach this acceptance and compassion, let’s actually practice what we preach. 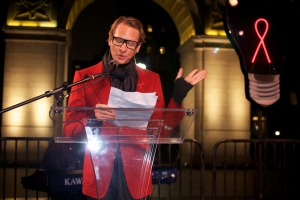 “Light for Rights was inspired by Night without Light, a project organized by Visual AIDS in the early 1990s in which the skylines of New York and San Francisco were darkened, as a symbolic reflection for the lives lost due to HIV.

This year, over 100 cities around the world dimmed the lights on public landmarks to remember the devastating affect AIDS has had, and to turn the lights back on to illuminate the fundamental human rights shared by all but often denied people living with HIV.”

Please enjoy the photos below and some insight into what each speaker had to say.

Kenneth Cole: How can you not love Kenneth Cole? This was the first time I saw him in person and he looks like a really nice, humble, and honest man.  He led this event and you can see his true compassion on human rights issues. I hope to meet him properly one day.

Liza Minnelli: Looking good my friend! Wow, she is enchanting in person. She spoke about the need to reduce rates of infection and  her experience on how three decades ago HIV was a new and unheard of disease and some of her friends started to find out they had been infected. 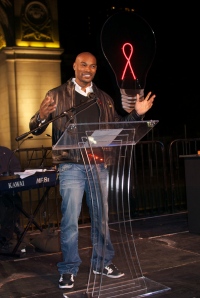 Tyson Beckford: Even Carson Kressley said “Thank Gd for Tyson Beckford”. He is so beautiful in person that I will let him pass for his very short and scripted speech:)

Joseph Deiss, Speaker of the UN General Assembly, actually stressed the importance of respecting the LGBTI community in the “Universal Access” of HIV prevention and distribution of antiretroviral drugs. Thank you Jack. Please give Raila a call next time you are at the Nairobi HQ. 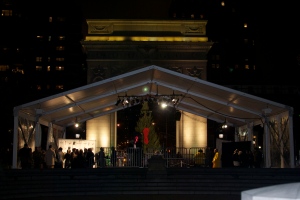 Happy Hanukah and Happy Holidays to all.
You know exactly what you need to give this holiday season!