Greetings to all from Jerusalem and an early Chag Sameach and Kosher Pesach to all!

Please read below’s context before watching the short video above on LGBTI Activism in Kenya.

Today I want to bring up a controversial issue that I am quite passionate about and seems to now transcend continents.

As a short back story, (and I wrote briefly about my affiliation to this issue  in a post back in December on World Aids Day….https://cafeavra.org/2010/12/02/world-aids-day-2010-tribute-with-kenneth-cole-liza-minnelli-tyson-beckford/ ), throughout my time in Nairobi I got very close to the LGBTI community and met some amazing, kind, and talented friends that I now miss very much.

Due to the criminalization of homosexuality in Kenya, they are mostly a hidden community of activists, by default, who  face a multitude of challenges each day…but still have time to smile.

And why has this suddenly re-sparked my interest?

So two nights ago I went with a gay friend here in Jerusalem, first to an Alma Zohar concert (a very cute, jazzy Israeli Singer–check out this song–http://www.youtube.com/watch?v=t0hpXQlYPi8&feature=related )  and then after to the only gay evening they have here in Jeruslaem…Monday nights there is a small drag show in town, which turns into a semi- dance party. Nothing crazy, just a place where people can meet, hang out, express themselves. I would say there were about 100+ people there…

So I am at the party, I am enjoying, dancing a bit, meeting some new people…and all of a sudden I see a few guys with a kippah (yarmulke) dancing, enjoying their time.  (For my non-jewish friends, a kippah is the head covering religious jewish men wear)

For a second it threw me aback…wow, okay, yes….ofcourse there are religious LGBTI individuals….I met them in Kenya and Uganda…they were my friends there!  But maybe because they were religious Christians it didn’t touch home so hard. And I live in Jerusalem now. It is a religious city, and you forget for a second(well actually almost completely) that some of these men, or women, you see on the streets actually define themselves inside as LGBTI.

Funny enough, my friend who took me to this club here in Jerusalem I met in Nairobi, though he is Israeli and was only there for about one month for work.(I am happy we crossed paths 🙂 )

I took him to a small LGBTI party on his last night in Kenya at a friend’s apartment, so he knew the scene a little bit.

So once I saw the religious guys I immediately said to him that I was a bit surprised for a second to see any religious guys here! He said, I know me too in the beginning but of course they are part of the community. And he said, Jerusalem, for the gay community, is like Kenya all over again in a certain way. Which in a way is true, especially for those who grow up religious. Though, as a back up, you have Tel Aviv! And at least you have one designated gay evening per week here in Jerusalem…in Kenya, it could not be possible. 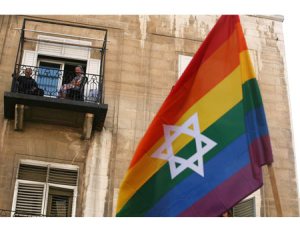 I continue to find myself surprised that I really do connect to the struggles of the LGBTI community, but I consider myself to now be an orthodox, straight- Jew…or alteast I do try to live my life in a way that follows Halacha (Jewish Law).  When it comes to certain controversies in Judaism…such as matters of Jewish identity for example, I find myself very right-wing. If your Mother is not Jewish, you are not Jewish. Simple as that, I am sorry to say. I don’t use negative words lightly, but I have an almost animosity towards the Reform Movement (I grew up ‘Reform’–whatever that means) for telling members of their ‘Congregation’ that if their Father is Jewish and their mother is not Jewish, they are Jewish.  No. They are not. I am sorry…”Reform Movement”….but political movements that arose in the 20th century can not change 2,000+ year laws…

You see my point.

But, when it comes to LGBTI issues, I really do believe that you can be religious, love GD, and GD also loves you…even if you classify yourself as LGBTI.

If you are Jewish, that is, someone born of a Jewish Mother, and you identify as being Gay or Lesbian…you are just as beautiful in GD’s eyes as those who identify as Straight.

A person who is kind and does mitzvahs for others is extremely beautiful in gd’s eyes.

And because I am not Gd, who am I to judge or treat a LGBTI friend, or person, any different from anyone else.

And the fact of the matter is, most of the people I know who identify as LGBTI happen to be some of the most amazing people I know. Some consider themselves religious, and some do not.

I made the video above for a few reasons.

First, to connect you to a member of the LGBTI in community in Kenya who, with a huge smile as you will see, works in creating dialogue with religious Leaders in Africa.

And to reiterate that South Africa is the only country in Africa where you can be openly LGBTI.

Hardly anyone I met in Kenya has been to a Gay Pride Parade, as the only one on the continent is in South Africa and it is usually quite an expensive journey.

My friends in Kenya dream to be able to attend a Gay Pride Parade, and if I truly had the money, I would try to bring them all over to Tel Aviv and Jerusalem this upcoming June for the day’s here. (My next follow-up post, gd willing, will be pictures from both pride days).

Thanks for reading, especially if you are someone who is not as open as I am to LGBTI issues.

I want to send my love to all my LGBTI friends all over the World…from Nairobi to Kampala…Jerusalem…New York…San Francisco…Manchester, UK. I love you for the beautiful souls that you are:)

And to those LGBTI friends outside Africa…remember the video above and do not forget their struggles!

Try to connect to the community in Kenya.

You can check out the Gay & Lesbian Coalition of Kenya’s website here : http://galck.org/

Or please do email me at cafeavra@gmail.com and I will put you in touch with GALCK.

Chag Sameach to all:)

One Reply to “From New York to Nairobi to Jerusalem. My Compassion Towards Religion and Homosexuality Continues to Grow…”